Game of Thrones – the chill beyond the wall is real 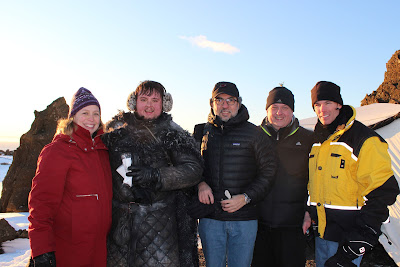 This week’s airing of “The Ghost of Harrenhal” brought Game of Thrones fans face to face with the Fist of the First Men - a place that is at once stunningly beautiful and as cold as the actors looked.  I can attest to it, having trekked up the mountain of Myrdalsjokull in Iceland, where some of the scenes were filmed.  I was lucky to meet some members of the cast and filming crew, including John Bradley, David Benioff, and Chris Newman.  I can’t wait for some of the battle scenes up in the Fist of the First Men and for the fans to get other shots of Iceland.   We were delighted to see the filming of a very popular American show in Iceland.
Posted by Ambassador Luis E. Arreaga at Friday, May 04, 2012