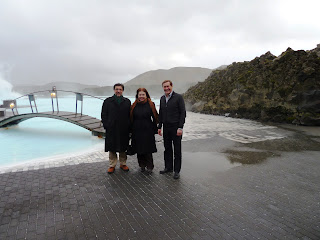 During a brief visit to the HS Orka power plant and to the Blue Lagoon, I had the opportunity to learn from management about the vision of their companies.  HS Orka is making every effort to minimize waste and reduce CO2 emissions.  It is a company with a very strong entrepreneurial spirit and a commitment to redefine itself in socially responsible ways.   The plant is a longtime partner with the Blue Lagoon, a very successful enterprise that seems to have defied the economic crisis with a sound business model that has enormous potential.  Both enterprises are privately held and appear to be very good examples of business models that offer great hope for Iceland’s future.
Some good news from Cancun
It was great to hear that the international community agreed to establish a Green Climate Fund to help developing countries cope with climate change.  The Fund will establish a framework to reduce deforestation in developing countries and a committee to promote international cooperation and action on adaptation.  While some may not be satisfied with the outcome in Cancun, it is significant progress and consistent with President Obama’s commitment to find a new path on climate change.  No one said it would be easy.
My first encounter with Svið: a draw.
I had been preparing for that fateful moment when I would confront my first dish of Svið.  It happened a couple of weeks ago and I would characterize the encounter as a draw between my aversion to eating a sheep‘s head and the tastiness of  traditional Icelandic cuisine.  Icelandic cuisine scored a goal to the extent that I liked the meat and will eat it again; I believe I scored a goal for asking that the plate be presented in a way that did not look like a sheep‘s head.   I realize this is not the real Icelandic experience, but it is a start.
Posted by Ambassador Luis E. Arreaga at Tuesday, December 14, 2010