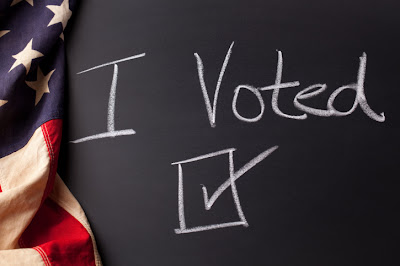 A lot of Icelanders have asked me questions about the upcoming U.S. elections, the ongoing debates, and the meaning behind them.  It is quite flattering to know of the interest that many Icelanders have shown in our democracy, especially during presidential elections when political debates are vigorous and when many voices in the U.S. express their views forcefully.  I tell my interlocutors that many Americans overseas take advantage of absentee ballots to make their voices heard and that our Embassy is ready to facilitate voting by American expatriates.  As for the elections, many of us are watching with interest the ongoing primaries and look forward to the national conventions when candidates are officially anointed and the national campaign begins in earnest.  Stay tuned.
Posted by Ambassador Luis E. Arreaga at Friday, March 30, 2012 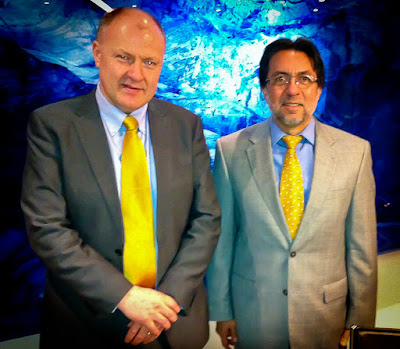 I had the pleasure of visiting Marel, one of Iceland’s top multinational companies with a worldwide reach and a world class leader in food processing technology.   Marel’s story captures the spirit of creativity, entrepreneurship, and hard work that characterize successful enterprises in Iceland and the United States.  Marel began as a small start up in Iceland and greatly expanded its reach and operations by entering the U.S. market and establishing production facilities there.  This is what happens when two countries share the same values, business outlook, and work ethic.
Posted by Ambassador Luis E. Arreaga at Monday, March 26, 2012

The Joseph Kony story in Iceland

Yesterday afternoon, the Embassy received a letter from a 14-year-old Icelandic student expressing her outrage about the atrocities committed by Joseph Kony’s Lords Resistance Army.   One could almost feel her frustration that something like that had been going on and she asked what more can we do to stop it.  We responded to her letter and confirmed what she had heard about American efforts to protect civilians, provide American assistance, and support the capture of Kony and the disbandment of the LRA. The efforts of people in the U.S. and worldwide to raise awareness about this issue through YouTube and other media is a wonderful demonstration of “people power” in action. For those of us who have worked with African issues over the years and are aware of these issues, it is encouraging and reassuring to see young people express their concern about human rights abuses and their desire that they be stopped.  Anyone interested in reading about what we told our young Iceland correspondent, can follow the links below. 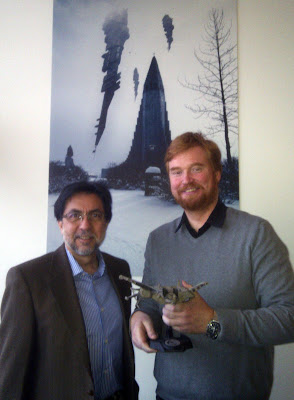 Visiting CCP opened a window into a world that the United States and Iceland share: computer gaming. It was quite energizing for an old gamer like myself to walk into the factory of fantasy worlds, dreams, action, drama, and excitement all rolled into one. During my visit to CCP, I had a chance to see DUST 514, CCP’s entry into the world of consoles and to take a peek at some of the surprises they have for us in the future. I also met some of CCPs executives based in the U.S. I can’t wait for this year’s Fanfest at Harpa which is expected to bring over one thousand gamers from all over the world.
Posted by Ambassador Luis E. Arreaga at Tuesday, March 06, 2012 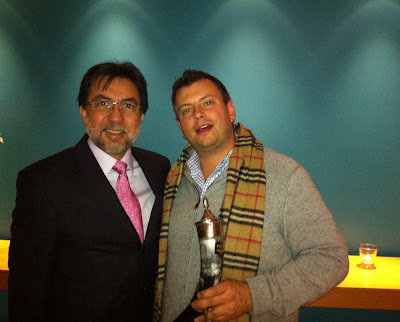 For the second time in the eleven years of the Reykjavik Food and Fun Festival, an American Chef took the main prize.  David Varley received the top award during the festival’s final event on Saturday evening.   We were delighted to see the coveted trophy go the U.S. this year.
Posted by Ambassador Luis E. Arreaga at Monday, March 05, 2012 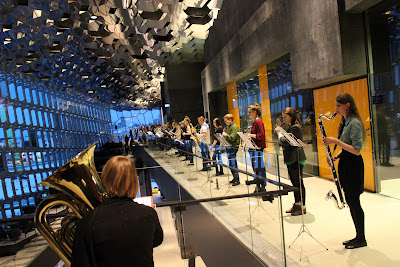 The Embassy was very pleased to support the Icelandic Symphony’s latest project: the Tectonics Festival. We were attracted to it because it was daring, different, and it was aimed at bringing music to young audiences. The opening last night at Harpa was very special. It was a quite unique experience to walk into Harpa where nearly every balcony overlooking the atrium was lined up with young brass musicians playing “Fifty-Eight “ by American composer John Cage. I would recommend anyone interested in listening to something different and unique to attend the remaining performances on March 2 and 3. You will hear the Icelandic music stars of tomorrow.
Posted by Ambassador Luis E. Arreaga at Friday, March 02, 2012

Food and Fun Festival with an American Twist 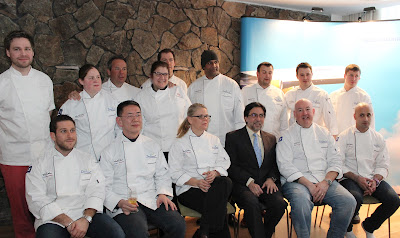 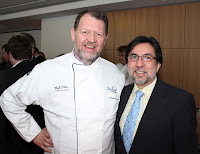 I attended the launch of this year’s Reykjavik Food and Fun Festival, an event designed to highlight Icelandic cuisine, but also to bring together chefs from all over the world. It was great to meet the huge American contingent participating at this event. We have renowned chefs from Los Angeles, Washington DC, Denver, New York, and a few other places. I’ll be cheering for all of them as they compete with their colleagues from other countries. The great benefit of this program is that Americans bring a bit from their homes to share with Icelanders and they take home a bit of Iceland with them. Cuisine is indeed an international language.
Posted by Ambassador Luis E. Arreaga at Thursday, March 01, 2012